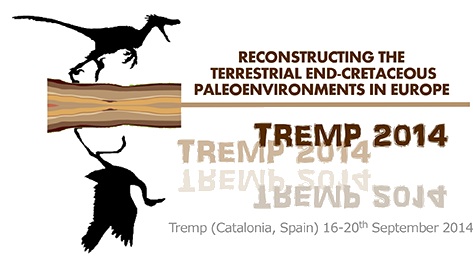 On behalf of the Organizing Committee we cordially invite you to attend the congress entitled “Reconstructing the Terrestrial end-Cretaceous Paleoenvironments in Europe”, from September 16-20th, 2014.

Tremp is located in one of the most famous areas known for its geology and remarkable outcrops. Also, the continental Tremp formation contains a unique and continuous record of the 5 My preceding the K/Pg (Cretaceous/Paleogene) extinction event. This record hosts important vertebrate, invertebrate and plant paleontological sites that are key to understanding changes in the Maastrichtian Paleoenvironments of Europe.

Aims and scope
This congress is a multidisciplinary meeting devoted to recent paleontological and geochronological advances, both in the marine and continental records, which allow envisaging the Maastrichtian and its boundaries under a global and integrated scope.

The terrestrial environmental proxies for the European continental record can now be compared with faunal and floral successions. This is a first step to understand how paleoenvironmental changes interacted with life on Earth during the last five million years of the Mesozoic in Europe. This will also assist to better clarify the role of the K/Pg extinction event and how the ensuing recovery took place.

In this context the congress will provide excellent opportunities for participants to present and share new data, hypothesis and research directions. The aim of the congress is to generate debate topics between specialists and discuss correlations schemes (geochronologic, paleontologic, geochemical) among the various paleogeographic areas. The organizers outlined various significant topics that hopefully will be of your interest.

- Geology and geochemistry of the paleoenvironmental changes.
- Biostratigraphy and geochronology. The Cretaceous-Paleogene boundary.
- Marine changes. Correlation with the terrestrial record.
- Successions and paleobiogeography of vertebrate and invertebrate faunas.
- Climatic and vegetation trends.

The Organizing Committee is planning a comprehensive congress with multidisciplinary scientific program including plenary conferences and communications. Participants will also have the opportunity to explore the geologic and paleontologic record of the Tremp basin by means of two fieldwork excursions. The field trips will include visits to important scientific localities of chronostratigraphic and paleontologic interest such as various continental exposures in the Tremp basin (including stratigraphic sections with the Cretaceous-Paleogene boundary), the Coll de Nargó area (with multiple nesting horizons of dinosaurs) and the Fumanya area (with important and large outcrops with dinosaur footprints).

This website uses cookies to improve your experience while you navigate through the website. Out of these, the cookies that are categorized as necessary are stored on your browser as they are essential for the working of basic functionalities of the website. We also use third-party cookies that help us analyze and understand how you use this website. These cookies will be stored in your browser only with your consent. You also have the option to opt-out of these cookies. But opting out of some of these cookies may affect your browsing experience.
Necessary Siempre activado
Necessary cookies are absolutely essential for the website to function properly. These cookies ensure basic functionalities and security features of the website, anonymously.
Functional
Functional cookies help to perform certain functionalities like sharing the content of the website on social media platforms, collect feedbacks, and other third-party features.
Performance
Performance cookies are used to understand and analyze the key performance indexes of the website which helps in delivering a better user experience for the visitors.
Analytics
Analytical cookies are used to understand how visitors interact with the website. These cookies help provide information on metrics the number of visitors, bounce rate, traffic source, etc.
Advertisement
Advertisement cookies are used to provide visitors with relevant ads and marketing campaigns. These cookies track visitors across websites and collect information to provide customized ads.
Others
Other uncategorized cookies are those that are being analyzed and have not been classified into a category as yet.
GUARDAR Y ACEPTAR