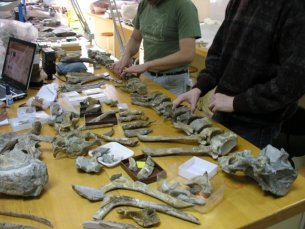 The geological and palaeontological record of the K-Pg boundary in terrestrial facies at the southern Pyrenean: State of the Art

Inicio / Aragosaurus / The geological and palaeontological record of the K-Pg boundary in terrestrial facies at the southern Pyrenean: State of the Art

The geological and palaeontological record of the K-Pg boundary in terrestrial facies at the southern Pyrenean: State of the Art

The dinosaur mass extinction proposal at the end of the Cretaceous owing to the catastrophic impact hypothesis is a sensational scenario that is deep seated among the public and some scientific groups. To document a global extinction of dinosaurs clearly requires having a late Cretaceous fossil record of dinosaurs from many areas around the world. As the majority of this record belongs to the central interior of North America we have a fairly good idea of what was happening in the interior of North America but we are almost totally ignorant of how dinosaurs die at the end of the Cretaceous in other parts of the world. Therefore, the main goal of this lecture is to show a unique record in the world: the last dinosaurs of Europe at the Maastrichtian localities of the southern Pyrenees and discuss it under the light of the dinosaur extinction.

The palaeogeographic region of actual Europe was composed of several islands at the end of the Cretaceous. The Ibero-Armorican Domain, which includes the Pyrenees, was the largest island of the European archipelago. The Tremp Formation outcrops hundred of kilometres from the province of Barcelona until Huesca more or less continuous. Historically, this geological unit in the southern Pyrenees has been referred to as the “‘Garumnian’’ facies, continental and transitional sediments deposited at the end of the Cretaceous and at the beginning of the Tertiary. In the last few years it has made a great effort for to know the correct position of the boundary between the Cretaceous and Palaeogene (popularly known as the K/T Boundary), document fossil record of vertebrates (particularly dinosaurs) of this Formation and place stratigraphically them in great detail.

Magnetostratigraphy, stratigraphic correlation with marine series, fossils with biostratigraphic importance as charophytes, palynomorphs, rudists and oospecies dinosaur has allowed to establish that the K/T Boundary would be in the upper part of the Tremp Formation. So far, it has not found evidences of the level of meteorite impact at the K/T Boundary, as would a peak of iridium or microtektites. This would allow us to place it precisely as in marine facies. The Tremp formation is a continuous geological record, so at some point they will find.

The first discoveries of dinosaurs in the Tremp Formation are from the 1920's. However, it has been in the last 20 years when you have made the majority of the findings lead by the teams of the Intitut Català de Paleontologia (ICP) and the University of Zaragoza. The dinosaurs are represented in the Late Maastrichtian of Tremp Formation by bones, ichnites and eggs (o eggshells) from sauropod, theropod, hadrosaurs and possible thyreophorans. The bones and footprints are relatively abundant, being easily recognizable on the field the level where dinosaur fossils they disappear.

The sauropods of the Late Maastrichtian are represented by various bone localities and several egg and track levels. Its fossil remains are scarce and fragmentary, despite, which it has been possible to identify the presence of three different titanosaurs. The fossil record of theropods consists in isolated teeth, few bones and eggshells. It represents some coelurosaurians and one possible neoceratosaurian. The teeth indicate a significant biodiversity, especially of small theropod maniraptorian. The bones and footprints of hadrosaurs are singularly abundant and diverse. New species have been described (Pararhabdodon, Arenysaurus, Blasisaurus) but do not seem to be the only ones that lived at the end of the Cretaceous. Very interesting are the footprints of hadrosaurs. They are abundant in the Mesozoic part of C29r magnetochron, i.e. in the last 300,000 years of the Cretaceous.

The Upper Maastrichtian dinosaur fossil record of southern Pyrenees is potentially one of the best represented of the world for to study the pattern of dinosaur extinction at the K/T Boundary. There is a continuous geological record with abundant dinosaur fossils. At the end of the Maastrichtian have been found remains of sauropods, hadrosaurs and theropods. In the upper part of the Tremp Formation dinosaur fossils disappear. When we find the level of evidence of impact of K / T boundary in the southern Pyrenees, we could relate the disappearance of the dinosaurs in the Pyrenees with the evidence of impact.

This website uses cookies to improve your experience while you navigate through the website. Out of these, the cookies that are categorized as necessary are stored on your browser as they are essential for the working of basic functionalities of the website. We also use third-party cookies that help us analyze and understand how you use this website. These cookies will be stored in your browser only with your consent. You also have the option to opt-out of these cookies. But opting out of some of these cookies may affect your browsing experience.
Necessary Siempre activado
Necessary cookies are absolutely essential for the website to function properly. These cookies ensure basic functionalities and security features of the website, anonymously.
Functional
Functional cookies help to perform certain functionalities like sharing the content of the website on social media platforms, collect feedbacks, and other third-party features.
Performance
Performance cookies are used to understand and analyze the key performance indexes of the website which helps in delivering a better user experience for the visitors.
Analytics
Analytical cookies are used to understand how visitors interact with the website. These cookies help provide information on metrics the number of visitors, bounce rate, traffic source, etc.
Advertisement
Advertisement cookies are used to provide visitors with relevant ads and marketing campaigns. These cookies track visitors across websites and collect information to provide customized ads.
Others
Other uncategorized cookies are those that are being analyzed and have not been classified into a category as yet.
GUARDAR Y ACEPTAR